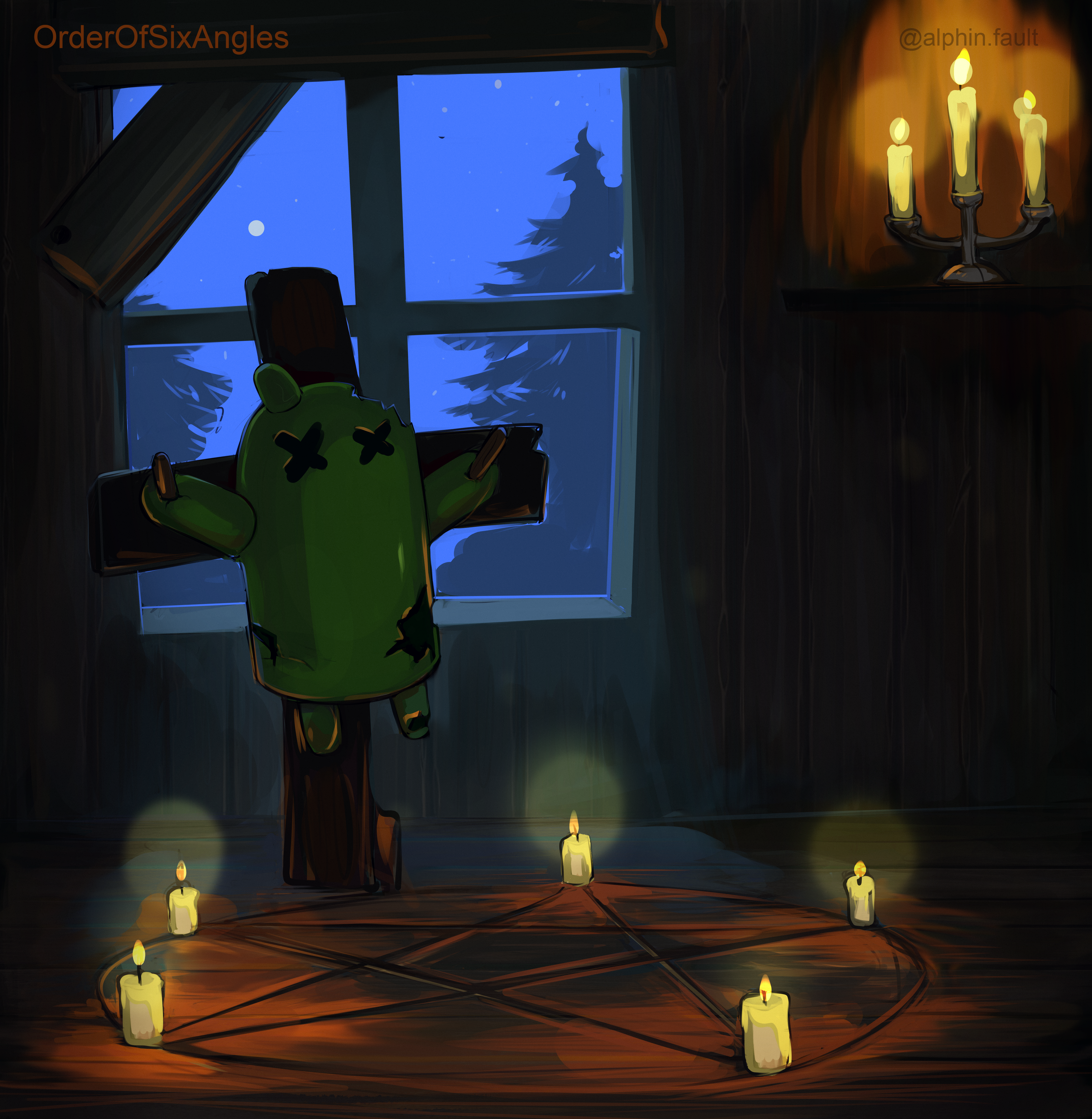 Author of the article and proof-of-concept code: Thatskriptkid

Target audience of the article - people who have an idea of the current way of infecting android applications through smali code patching and want to learn about a new and more effective way. If you are not familiar with the current infection practice, read my article - How to steal digital signature using Man-In-The-Disk, chapter - “Creating payload”. The technique described here was completely invented by us; there is no description of such a method in the Internet.

Disadvantages of the current approach

The way to inject malicious code by decoding the application to smali code and patching it is the only and widely practiced method to date. smali/backsmali is the only tool used for this. It is the basis for all known apk infectors, for example:

Malware also uses smali/backsmali and patching. The work algorithm of the Trojan Android.InfectionAds.1: 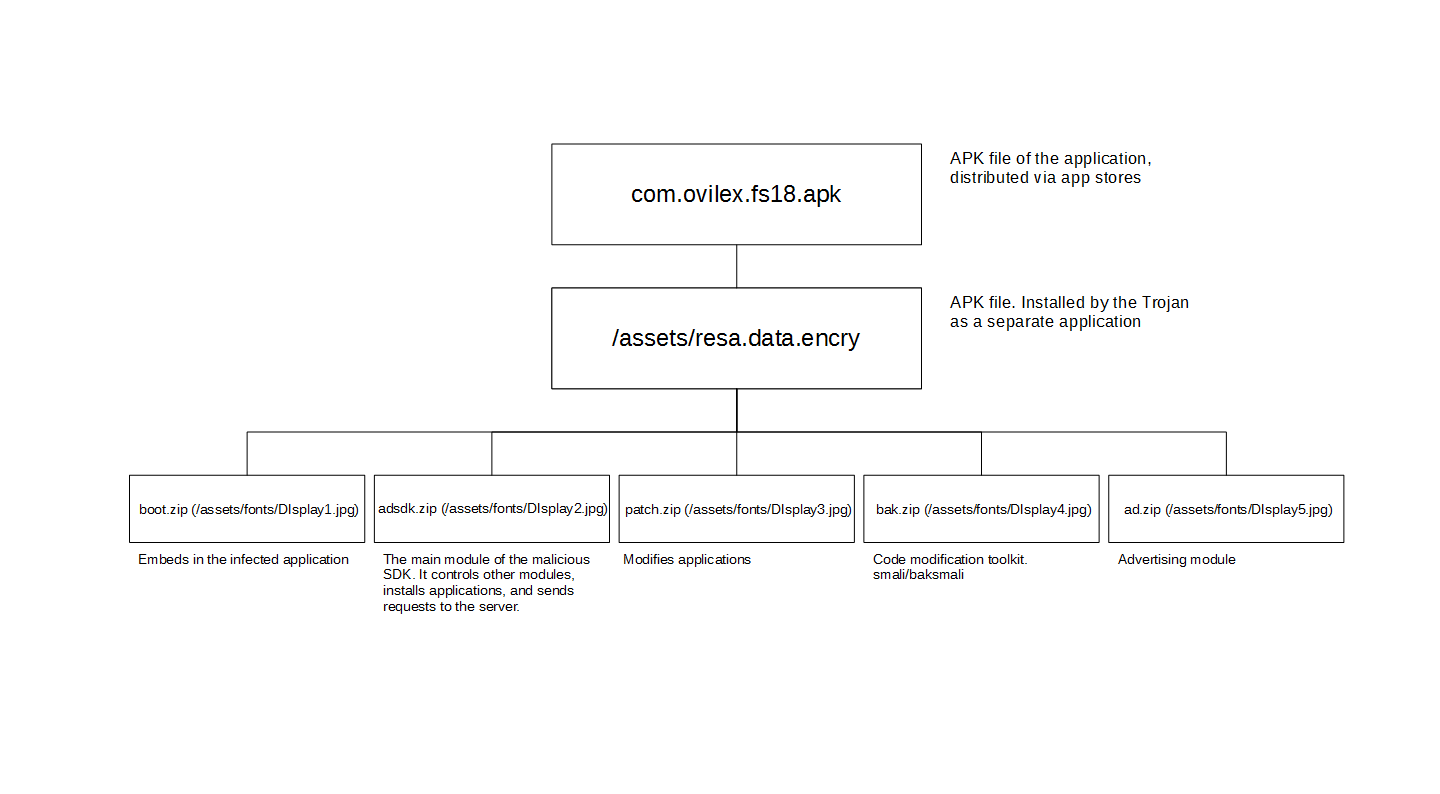 DEX decoding/disassembling is a complex process that requires constant updating and highly dependent on the android version.

Almost all available infection/modification tools are written in Java and/or depend on JVM - this greatly narrows the scope of use and makes it impossible to launch the infectors on routers, embedded systems, systems without JVM, etc.

Description of a new approach

There are several types of starting applications in the android, one of which is called cold start. Cold start happens when application is started for the first time. 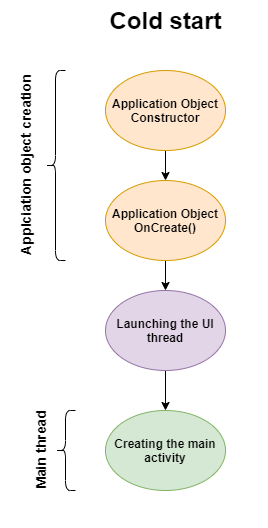 The execution of an application starts with the creation of an Application object. Most android applications have their own Application class, which should extends the main class android.app.Applciation. An example of a class:

The class test.pkg.TestApp should be registered in AndroidManifest.xml:

The process of launching such an application: 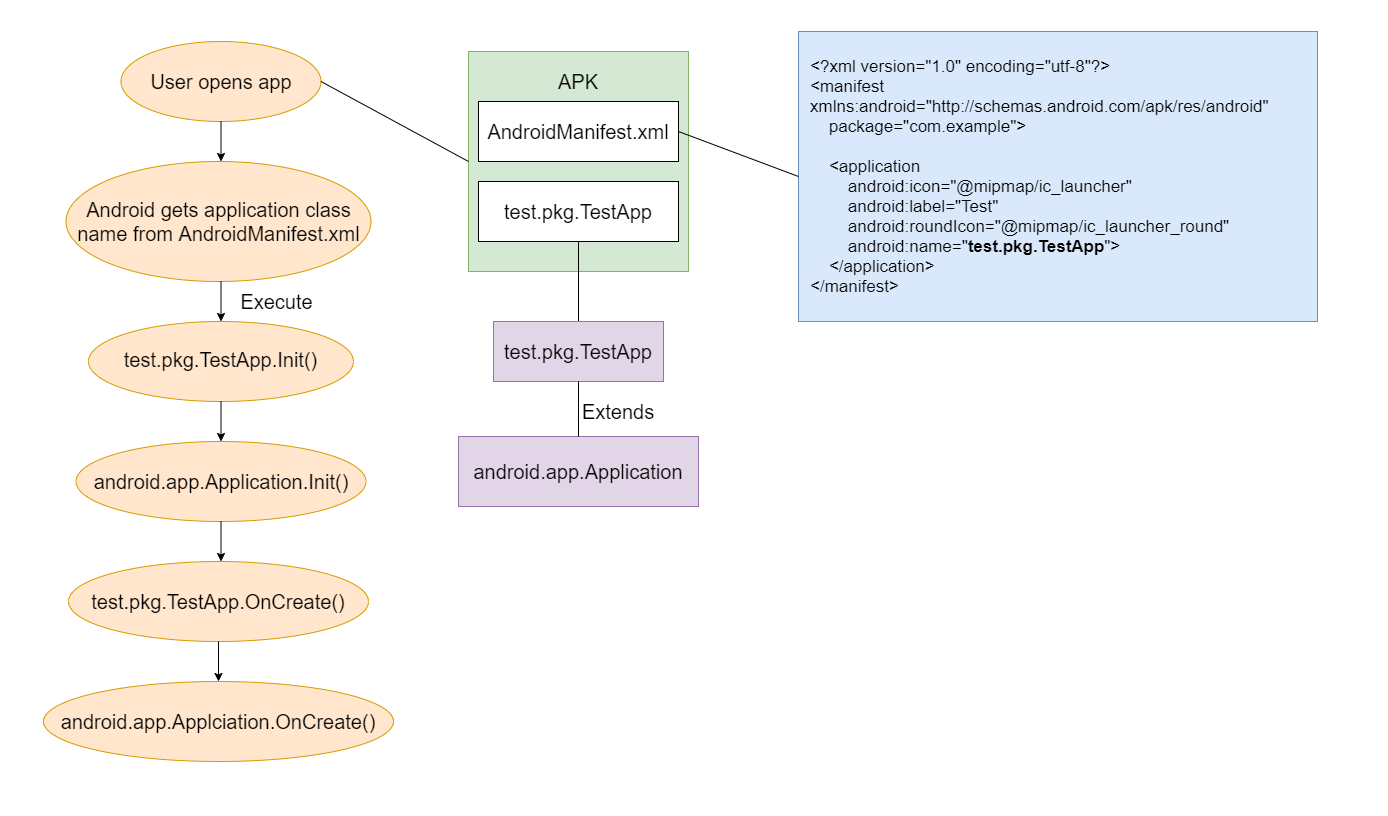 The basic requirements for our infection techniques have been defined:

The injection of the malicious code took place at the stage of the cold start:Application Object creation->Application Object Constructor. A malicious Application class was created, injected in the APK and spelled out in AndroidManifest.xml, instead of the original one. To preserve the previous execution chain, it was inherited from test.pkg.TestApp.

The process of launching malicious code inside an infected application (modifications are marked in red): 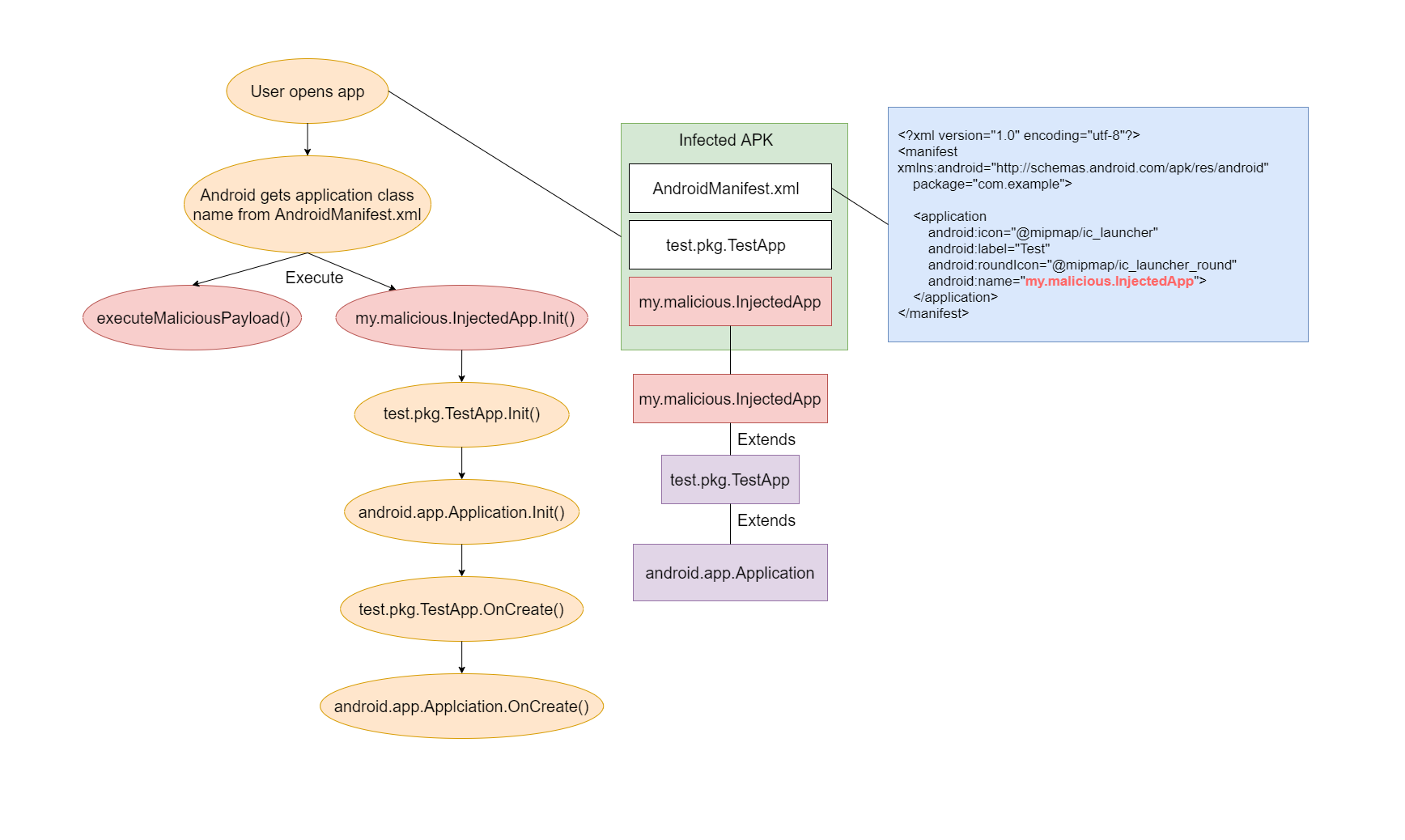 The benefits of the new approach

It is possible to apply necessary modifications to the APK:

These facts allow you to infect almost any existing application without restrictions. Adding your own class and modifying the manifest works much faster than decoding DEX. The malicious code injected by our technology starts immediately, as we are injected right at the beginning of the application launch process. The described infection technique doesn’t depend on the architecture and version of the android (with a few exceptions).

The PoC for demonstration was written in Go and is capable to be extended to a full featured tool. PoC is compiled into one binary file and does not use any runtime dependencies. Using Go allows using cross compilation to build an infector for almost any architecture and OS.

Testing of infected APK by PoC was on:

One of the modifications required for the infection is to replace the string in AndroidManifest.xml. It is possible to patch the string without decoding/encoding the manifest.

APKs contain the manifest in binary encoded form. The structure of the binary manifest is undocumented and represents a custom XML encoding algorithm from Google. For convenience, was created a description in Kaitai Struct that can be used as documentation. 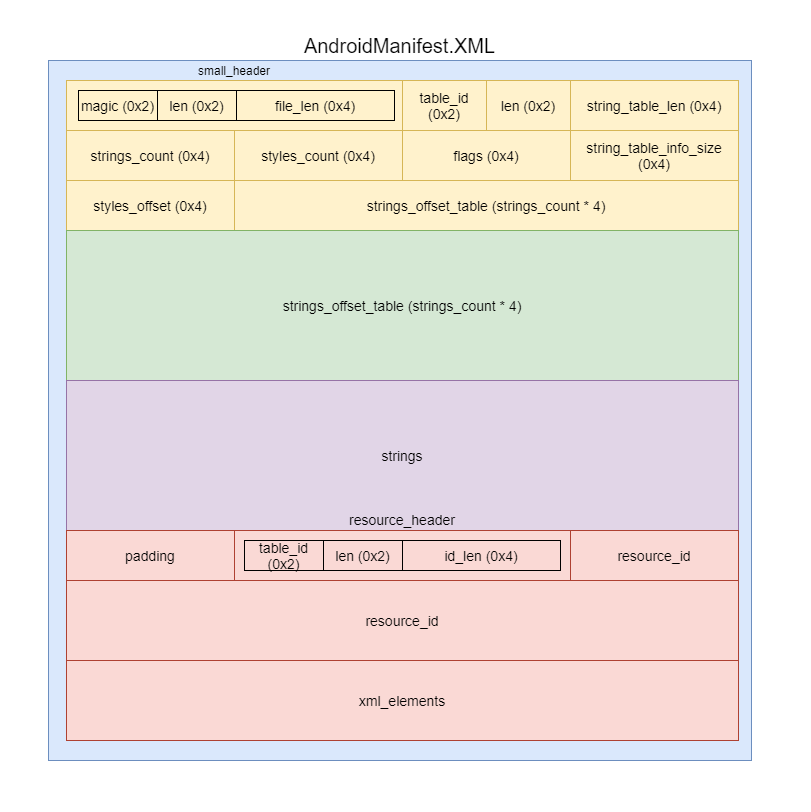 Two applications with different class names were developed to detect changes in the manifest, after patching the original Application class name to a malicious one. The applications were built into an APK and unpacked to produce binary manifests.

An example of the original manifest:

An example of a patched manifest:

The length of the fully-qualified class name has increased by 9 characters. Both files were opened in HexCmp, to get the diff.

Changes to the manifest and explanation of reasons:

In the structure of the manifest given at the beginning, after strings follows padding to align resource_header. In the original manifest, the last line of uses-sdk ends on the offset 0x322 (orange), which means that two bytes of alignment (green) for resource_header have been added. 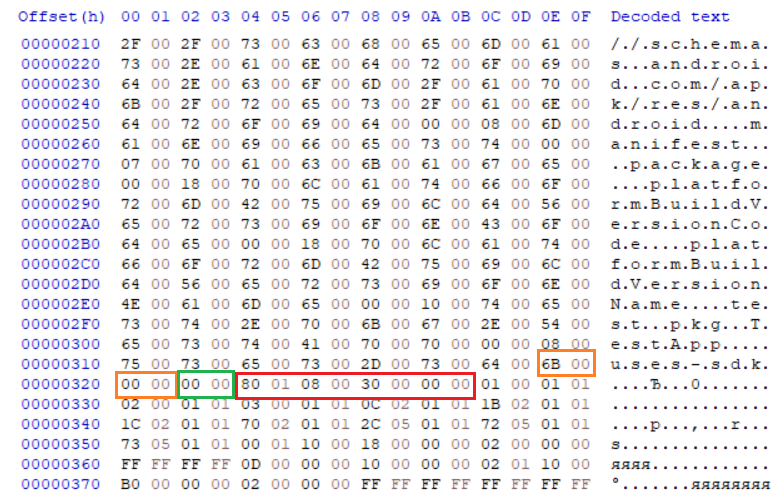 In the modified version, string_table ends in offset 0x334 (orange) and then immediately follows resource_header (red), which does not require alignment. 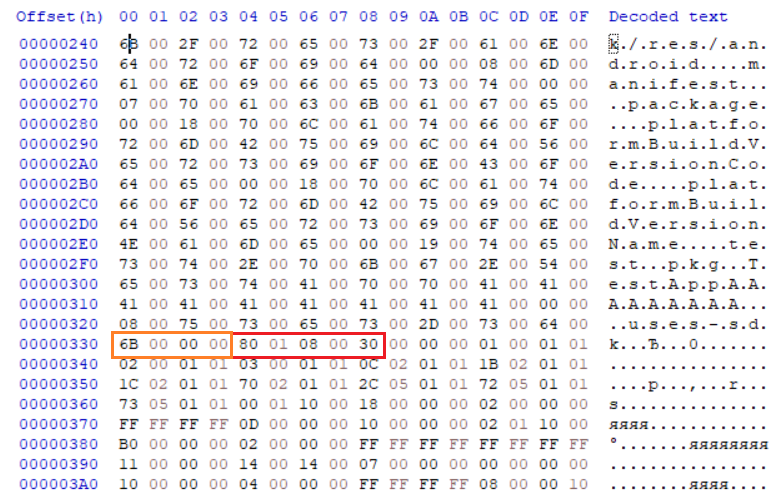 AndroidManifest.xml structure scheme, with an indication of fields to be patched, to replace the name of the original Applciation class with a malicious one (marked in red): 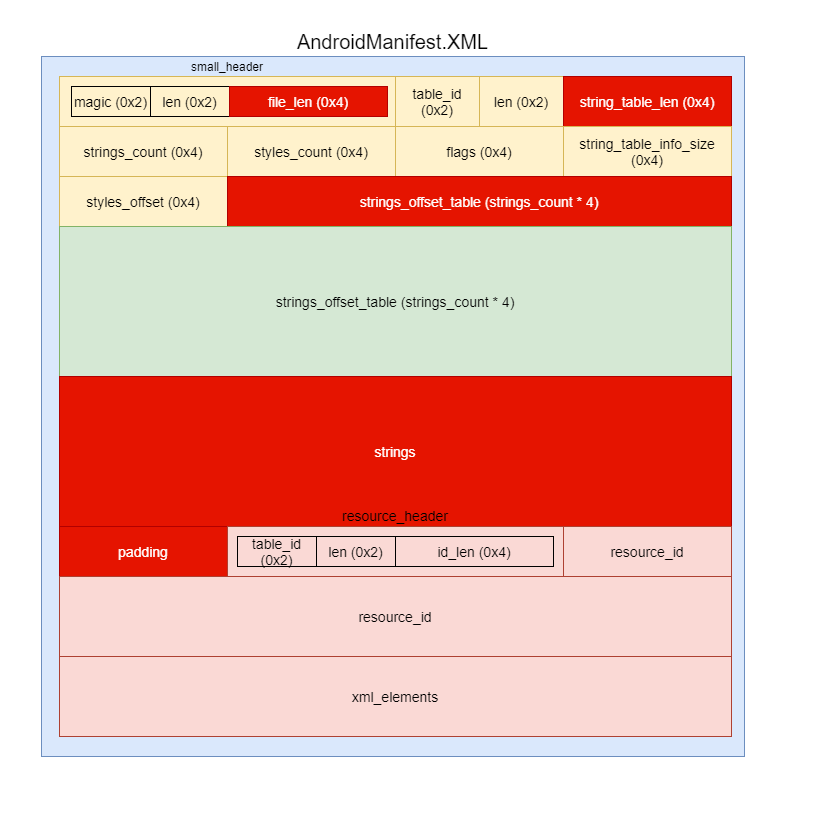 The Proof-of-Concept code developed for the article implements these modifications in the manifest.Patch() method.

Creating files to be injected in the target application

The second modification needed to infect is the injection of a class with malicious code. In order to save the original application startup chain, an Application class must be injected into the APK, the parent class of which must be the original Application class. At the stage of preparing the files to be injected, it is unknown. Therefore, when creating the class, it was necessary to use the name placeholder - z.z.z.

The initial state of the application and the DEX to be injected: 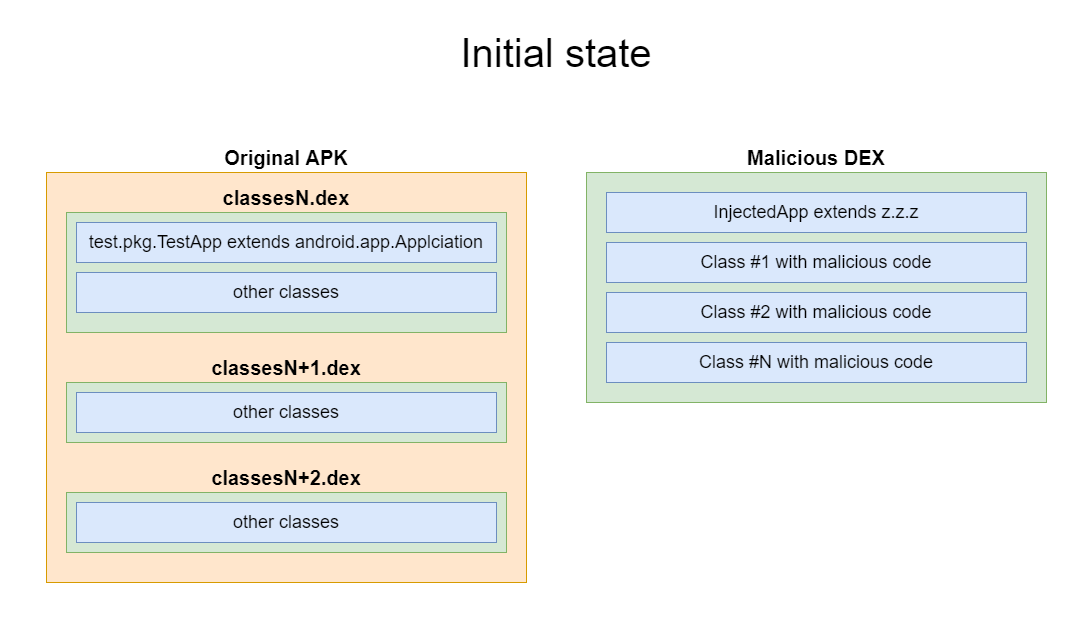 After receiving the original name of the Application class from the manifest, the placeholder was patched: 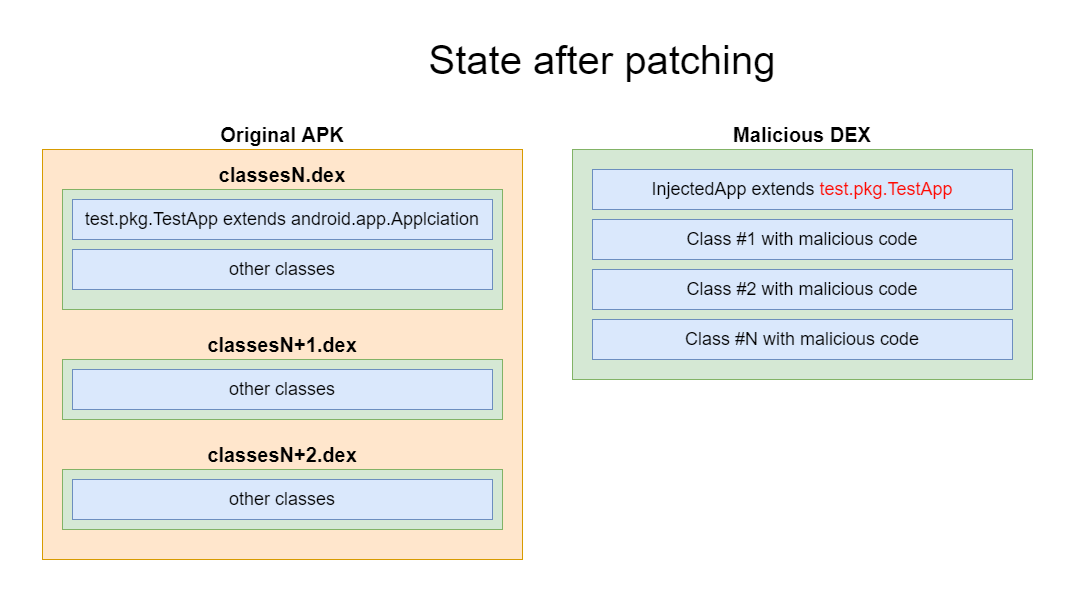 The infection process ends with the addition of the malicious DEX to the target application: 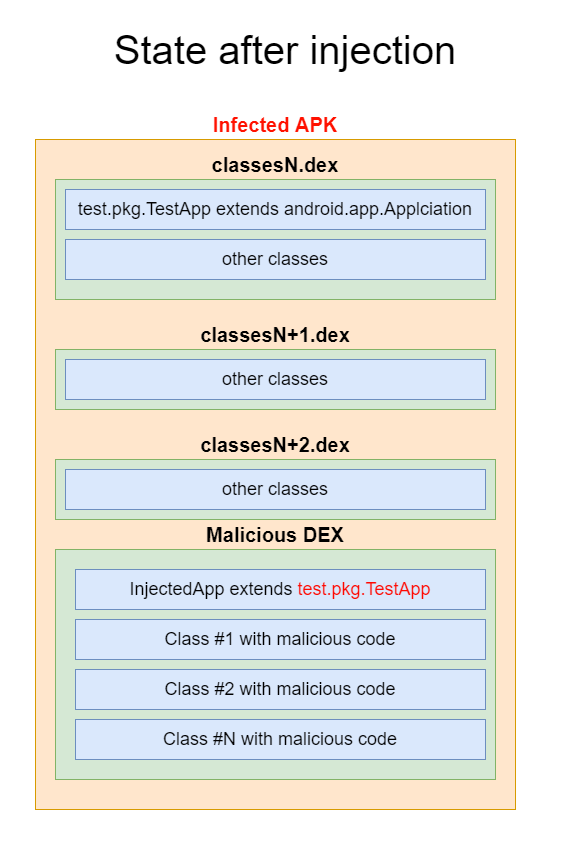 Since classes with malicious code can have different code, they were put into a separate DEX. This was also done to simplify the patching of the placeholder: 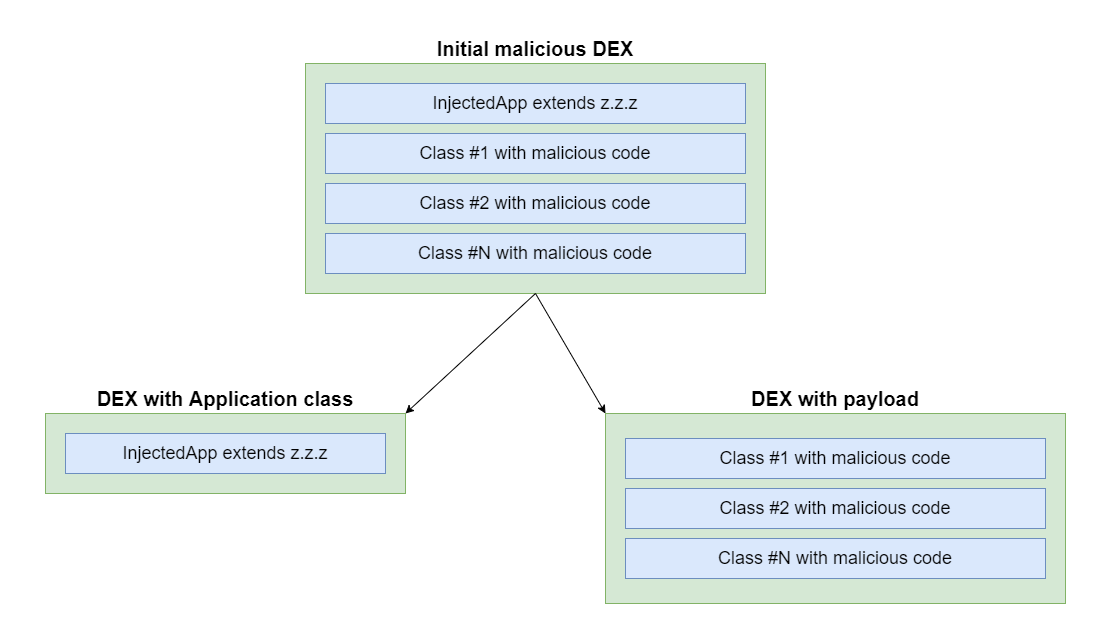 The class names in DEX are arranged alphabetically. The Application class name of the target application can start with any letter. For predictable string order, after the patching, the name of the placeholder was chosen to be z.z.z. 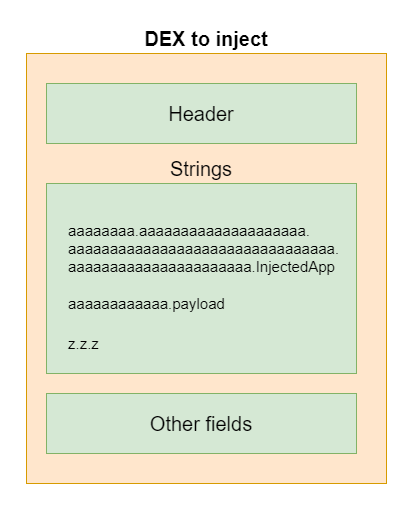 To prepare the files to be injected, a project was created in Android Studio, with three classes.

This name must meet two rules:

The InjectedApp class that will be executed instead of the Application class of the target application:

The main goal of the class is to start executing a malicious code that is in another DEX:

The full name of the class must satisfy the following rule:

To inject arbitrary malicious code, you must create a DEX file that must comply with the conditions:

A placeholder class z.z.z, whose full name will be patched to the full name of the Applciation class of the target application.

The class must comply with the conditions:

According to the developed injection scheme, the InjectedApp and payload classes were compiled into separate DEXs. For this purpose, Android Studio built the APK with Android Studio->Generate Signed Bundle/APK->release. The compiled .class files were created in the folder app\build\intermediates\javac\release\classes.

The resulting DEX should be added to the target application.

Identifying the necessary modifications in DEX and patching

After patching the placeholder z.z.z to the full name of the Application class of the target application, the DEX structure will change. To detect modifications, two applications with class names of different lengths were created in Android Studio.

The InjectedApp class, inherited from z.z.z, in the first application:

The length of the class name increased by 15 characters. Classes were compiled separately into DEX:

Official documentation on the DEX structure 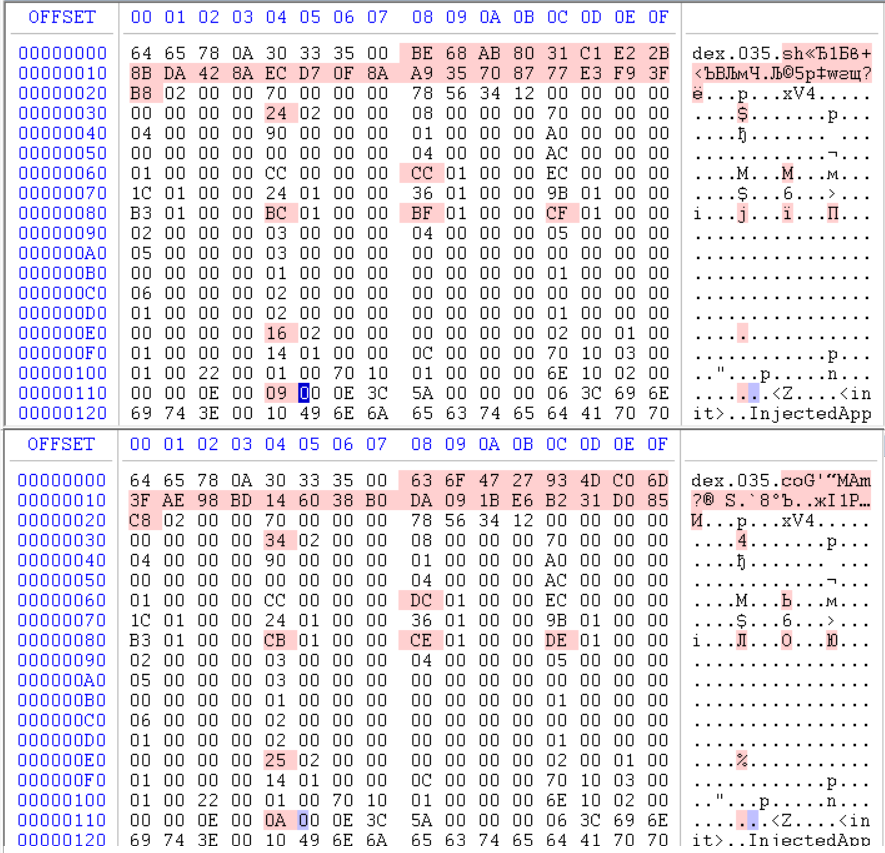 Changes at the end of the file:

The Proof-of-Concept code developed for the article implements these modifications in the mydex.Patch() method.

To apply the necessary modifications, we have developed PoC, which works according to the algorithm:

Limitations of the new approach

This technique will not work with applications that meet all conditions simultaneously:

Thus, it is assumed that the application has one DEX file. The restriction applies because the android versions before Android 5.0 (API level 21) use the Dalvik virtual machine to run the code. By default, Dalvik only accepts a single DEX file in the APK. To get around this limitation, you should use the above libraries. Android versions after Android 5.0 (API level 21), instead of Dalvik, use the ART system, which natively supports multiple DEX files in an application, because when you install an application, it will compile all DEXs into one .oat file. See official documentation for details.

Q: Why not use underscores in the full name of InjectedApp, so it is almost guaranteed to be alphabetically above any name in the Application class of the target application?

Q: Why not inject Activity and write it in the manifest instead of the main one, because it also starts first? Yes, with this method, payload will run a little later, but it’s not critical.

A: There are two problems in this approach. The first is that there are applications that use a lot of tags activity-alias in the manifest that refer to the name of the main activity. In this case we will have to patch not one line in the manifest, but several. It also makes it difficult to parse and find the name of the desired Activity. The second is that the main Activity runs in the main UI thread, which imposes some restrictions on the malicious code.

Q: But you can’t use services in an Application class. What kind of malicious code can there be without services?

A: First of all, this restriction is introduced in the Android version starting with API 25. Secondly, this limitation applies to the android applications in general, not to the Application class specifically. Third, you can use services, but not ordinary services, but foreground.

Q: Your PoC is not working

A: In this case, make sure that:

If nothing helped, try to play with the -min-api parameter when compiling classes. If nothing worked, then create an issue on github.

Q: Why was the Application constructor selected for the infection and not the OnCreate() method?

A: The point is that there are applications that have an Application class that has the OnCreate() method with the final modifier. If you put your Application with OnCreate(), the android will generate an error:

Reasons for the error here

The Android detects that the super method is final and gives out an error.